Jody Summer is the pilot of the White Cat. She is also the leader of the Elite Mobile Task Force, was a former Galaxy Police officer, and is the younger sister of Captain Falcon (Andy Summer).

Jody is generally perceived as a bit of an ice queen, due to her serious and domineering nature, and her role as the Elite Mobile Task Force leader. She is dedicated to her work and will not tolerate failure nor nonsense from any other member of the team.

Despite this, she cares about them, even if she ends up pushing Ryu Suzaku the most. She is also not entirely cold, as she develops a mother-like fondness for Clank Hughes, and laments over the loss of her brother, Andy Summer.

Yet the unnerved, cold front has its perks, seen during Lap 21 at the 2202 Ladies Race, when Jody seemed to be unfazed by Miss Killer's remarks until the Task Force leader set the Galaxy Runner to fire its laser cannon at Miss Killer's machine.

Her parents died when she was a child, but she lived with her older brother Andy, who basically raised her. Looking up to him, she wanted to be a Galaxy Police officer like him. Unbeknownst to her, as the two grew, her own brother was Captain Falcon.

In the year 2198, as Mute City was nearing peace, the Galaxy Police were in a stand off against Dark Million. Jody was a regular officer at the time, following after her more 'courageous' brother into the line of fire. She had been caught off guard by Zoda with a rocket launcher, to which Andy would dive onto her to shield her from the blast.

Only the higher ups of the Galaxy Police would know of Jody's partial cyborg reconstruction since then, due to the fact she almost died and was revived thanks to Dr. Stewart. Jody also became the leader of the Elite Mobile Task Force, in the effort to stop Dark Million.[1]

At Memory Park, shortly after the 2198 incident, she apparently dispatched all the workers when her brother's body was brought in, leading to numerous questions and mysteries involving her brother's death.

At some point, after becoming the captain of the Task Force, she met The Shinigami, Jack Levin's former persona as a street thug. After chasing him down,[2] she had gone to check on his condition after he fell off his hoverbike.[2] As it exploded behind them,[2] she asked if he was alright.[2] It was through Jody’s actions that Jack decided to clean up his own act and do something else with his life, thus becoming a member of the Task Force under her command.[2]

In the year 2201, she was the one who had called for Ryu Suzaku's revival after discussion with Dr. Stewart and Director John Tanaka, and later inducted Ryu into the Task Force. Though, it would seem as a result of meeting him, she has considerably warmed up since the beginning of the series.

Jody was also the one to introduce Lucy Liberty to the rest of the Task Force on the planet Clifoto during Lap 3, and assigned her as Dr. Clash's apprentrice.

She also revealed to Ryu that she was partially a cyborg during Lap 9, as a result of an incident that occurred three years before 2201, which involved losing her brother.

From footage that Ryu and Lucy Liberty were watching of the previous Ladies Race in Lap 21, Jody was a participant in the 2201 F-Zero Ladies Race. Alongside Mrs. Arrow, Kate Alen, and several other participants (unknown pilots, in recolored canon machines such as a purple Blood Hawk, red Sonic Phantom, green Night Thunder, and various others), Jody's main rival appeared to be Lisa Brilliant. The two women exchanged a glance at each other from within their machines at the starting line, and turned their noses up as they averted their gaze from one another. But even with the competition, Jody apparently came out as the winner. Thus, she was crowned "Miss Galaxy," complete with a trophy, crown, and royal cape.

Jody would continue her work as the captain of the Elite Mobile Task Force, but also participated in the 2202 edition of the Ladies Race. However, this time, the race was cancelled due to the acts of warfare and destruction between the women involved. Jody was not innocent, having set the Galaxy Runner to fire a laser in Miss Killer's direction as retaliation against the Dark Million henchwoman's remarks.

Despite her focused nature, she was also plagued with thoughts of her brother throughout Lap 31 and Lap 38, and had left a bouquet of salvias where he had died years prior. Upon recalling that she may have seen him in a crowd for a brief moment, she headed to the morgue for a reaffirmation of her brother's status, but to her surprise, Andy Summer's body was missing.

She was then invited to the Falcon House by Clank Hughes, and immediately recognized 'Bart Lemming' as her brother. However, upon trying to confirm her suspicion, Andy, as 'Bart' refuted the claims. Captain Falcon then appeared to confront Jody later, advising that she should let go of her brother and focus on bigger priorities. Left to wonder why he would know anything about the situation, she then noticed a bouquet of salvias on her machine.

As Ryu Suzaku and Captain Falcon were later engaged in a battle with Blood Falcon on the planet Tank, the three pilots' Reactor Mights caused the water levels to elevate in the cave they were in. After Falcon risked his life to save Ryu from the Dark Space vortex that had formed, Jody desperately called out to her brother who she then realized had been Falcon the entire time. Unfortunately, there was nothing she nor Ryu could do for Andy, as the latter was pulled into the vortex with Blood Falcon.

However, after Andy pulled back a disguise (Berserker) and revealed himself to be alive by Lap 47, Jody was able to reunite with her brother again in Lap 49. As the F-Zero Committee's connections to Dark Million were being addressed by the Galactic Space Federation, the siblings discussed their plans to track Black Shadow and Deathborn, with Andy telling his sister to be careful.

Their reunion would also only last a short time, as the final battle with Black Shadow and Dark Million was approaching. Andy's final words to Jody are given in Lap 51 as he leaves Haruka's unconscious body to her, stating that this is his final mission and that he won't let darkness win.

Upon realizing what happened to her brother shortly after the Task Force retrieved Ryu from the remains of the Dark Matter Reactor, she mourns for Andy. However, they also spot her brother's helmet, the only thing left of him. Polishing it, Dr. Stewart asks Ryu if he's willing to take Andy's place, and Jody encourages Ryu to take on the mantle of Captain Falcon.

By the year 2207, she is seen in the Grand Prix alongside Jack Levin and Lucy Liberty on the track.

Notes: Though the "Elite Mobile Task Force" is used in the US manual and the English dub of the F-Zero Farukon Densetsu anime, the game and PAL manual use "Galaxy Mobile Platoon" for some reason.

In the F-Zero GP Legend GBA game, Jody is a playable character with her machine, the White Cat. She is also featured as a Story Mode character.

Jody in the opening.

Jody during Lap 21, ready to fire the Galaxy Runner's cannon at Miss Killer.

Jody in her casual clothes during Lap 31. 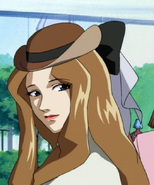 Jody in her casual clothes during Lap 38.

Jody calling out for Andy in Lap 38.

Jody and her brother discussing their plans in Lap 49.

The last time Jody and Andy are seen together in Lap 51.

Community content is available under CC-BY-SA unless otherwise noted.